This activity for primary-aged children (age 7 onwards) is a treasure hunt with two maps. The Island of Squaregridia has a pre-defined map with a couple of suggested routes which can be used to introduce the game and concepts. The Island of Blanksquaresia is, as the name suggests, a blank map for the class members to create their own treasure map and then communicate the steps and instructions to another class member who’ll try and follow their route to find where they’ve hidden the treasure.

This activity/game illustrates this concept using the analogy of a treasure hunt on a small imaginary square island. The class (individually, in pairs or in groups) will use a blank 16-square (4×4) grid to create a treasure map by selecting a START square and a STOP (ie the TREASURE) square, and drawing a few TRAPS on other squares to avoid along the way. They’ll then plot a route from START to TREASURE, while avoiding the TRAPS, and communicate this in a step by step way to a ‘visitor’ to their island who’ll plot the route on a fresh copy of the ‘map’ to see if they can find the treasure.

There are two islands – (1) the Island of Squaregridia is an island with a pre-filled map and a couple of suggested routes for practice and (2) the Island of Blanksquaresia is completely blank (other than having a compass rose in one square) for the class to create their own map and communicate a route to someone else. 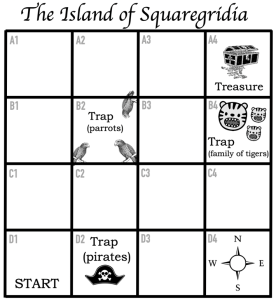 This map has two suggested simple routes which could be run first as a practice run in class, there’s also an optional ‘Test Island’ mini-grid that shows how to communicate the instructions. 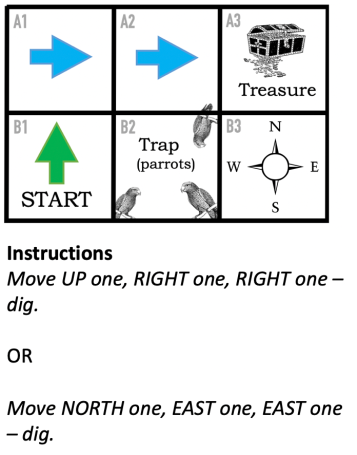 The printable activities below include example maps, example routes and test maps for use (4 per page).

This is a blank map (the starting square is not marked) with just a compass rose (North, South, East, West). People working individually or in groups are given a copy of the blank island on which to create their treasure map (location of START, TREASURE and any TRAPS) and work out the route they want to give someone else (the ‘visitor(s) to their island who are seeking the treasure). They then swap with another person or team and give their instructions verbally so that their visitor(s) can find the treasure using a new blank map. They need to tell the visitor(s) which square they’ll start from (eg “B3”) and in which direction to move for each square.

Everyone (or every team) has two copies of the blank map – one to create their own route on, and one to follow someone else’s route on… plus some spares in case.