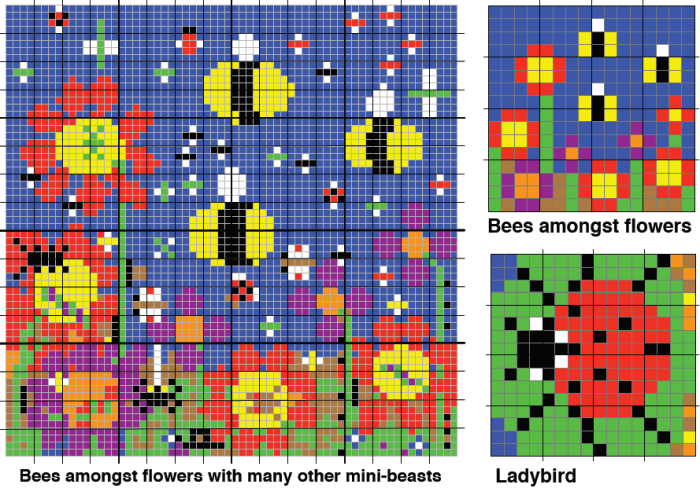 Pixel puzzles turn the ways images are represented as a series of numbers representing pixels into puzzles. They come in various forms from a simple variant of colour-by-numbers to more complex puzzles based on compression where images are represented by fewer numbers so take up less storage – but can you get them back! Each representation needs its own algorithm to follow to get the image back.

Colour the grids or make them from lego, or even use them as needlepoint/tapestry patterns!

Teach as part of:

One way images are represented and so stored in a computer or digital camera is as a grid of numbers. This way of representing an image is called a bitmap image or a raster image.

Each image is split in to a grid of squares. Each number gives the colour of that square of the image. Each square is called a pixel. The more pixels making up the image the higher the resolution it has. Higher-resolution pictures have more detail and in particular lines are smoother. The image is less pixelated – you see the squares less. It also means you can see more fine detail – smaller things may disappear in a low resolution image.

Each image has to also come with (or have pre-agreed) a key indicating which number corresponds to which colour. The number of colours allowed is called the colour depth. The more colours, the more bits are needed to store each pixels colours. With two colours you need a single bit for each pixel, with 4 colours you need 2 bits, with 8 colours you need 3 bits, and so on. Each bit pattern represents a different number and so a different colour.

An important part of computational thinking involves being able to choose an appropriate representation of data. It is important to know about different representations already used. Choosing representations is a part of abstraction: choosing what matters to represent about data and what can be ignored. With bitmap images, part of that is in choosing the resolution.  By splitting the image in to small squares and ignoring finer detail, we get an easy way to store, manipulate and transmit images. Once the image is a list of numbers we can explore variations of the representation that allow us to compress the image – store it using fewer numbers.

This is also an example of decomposition with respect to data. The image is decomposed in to small squares. A different way to decompose an image, so a different representation is by the lines and shapes within it. This decomposition instead leads instead to vector images.

Every image is unique, but by choosing a representation of bitmap images we get a generalised way to represent an image. Any image can be represented this way.

Each square holds a number that tells you the colour to colour in that square. Look up the colours in the key.

Explore different algorithms for colouring them in. For example:

Here are Colour by Number Pixel Puzzle Picture sheets and solutions that you can download. Here the answers are visible so you can see what the pictures are – or send kids to our “Bit of cs4fn” website where they can download them directly themselves without seeing the answers first.

Bees amongst flowers with many other mini beasts 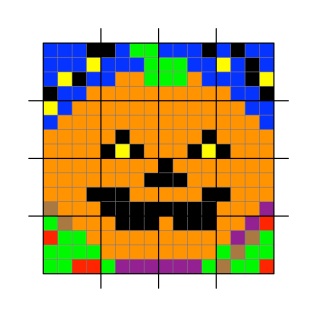 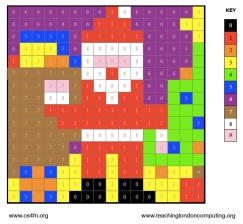 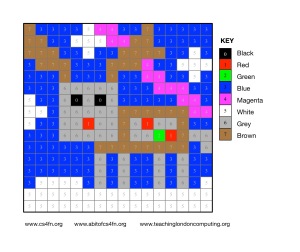 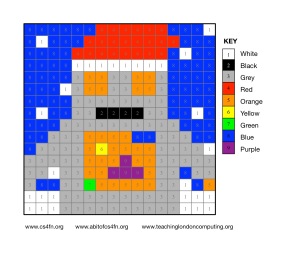 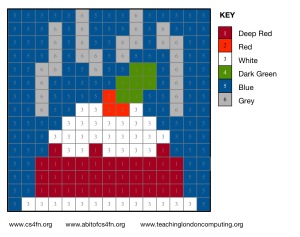 The Romans and Pixel Puzzles

Teach some computing when covering the Romans: mosaics are just pixel pictures. They even realised they could make really detailed (high resolution) images by using small tiles or tesserae. Try our Roman Mosaic Pixel Puzzle or why not make your own Roman mosaic version of a pixel puzzle. Find out more on our Roman Mosaic Computing page including a link to an online mosaic designing site. 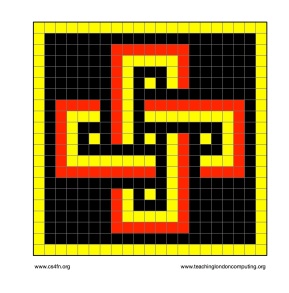 Images are represented as numbers but numbers can be represented in lots of different ways. Here are some pixel puzzles using different representations for numbers.

Pixel puzzles can be turned in to programming puzzles by programming a turtle to paint the picture given the numbers. There are different algorithms for programming it just as humans do them in different ways. The turtle could, for example:

The simple colour by number pictures include the numbers on the grid, but what if you want to send a picture to someone else. You just need to record the list of numbers and know the grid size. These puzzles can be combined with activities sending images across the room by e.g. holding up cards one at a time, for the distant person to copy down, for example.

Each line of instructions tells you how to colour the next one or more lines of the picture by giving the number corresponding to the colour of the next pixel.

Here are Colour by Number Pixel Puzzle Picture sheets and solutions that you can download. 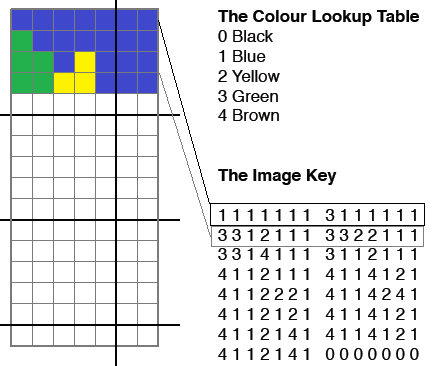 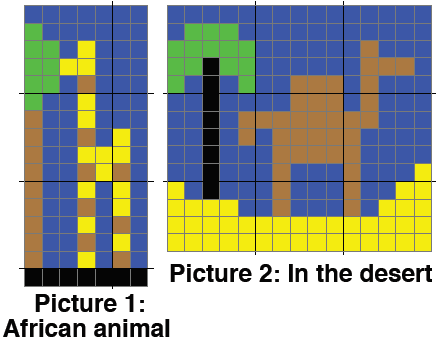 The next step is to explore real images. You can convert actual image files into a spreadsheet, eg holding x,y and R G B numbers for each pixel. You can then change the numbers (eg zeroing all the Green values) and then see what you get.

This can also be used as an introduction to the idea of compression – if you know something about the properties of a picture you can reconstruct the image despite storing fewer numbers! 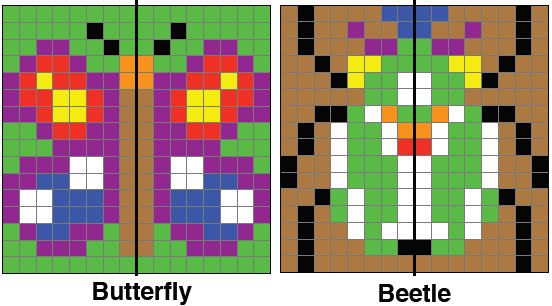 Find out more on our symmetrical pixel puzzle page

We give these puzzles in two forms, one slightly harder where everything is numbers and the other easier to follow where the colours are given explicitly. Each pair gives the number of pixels to colour and the colour to use. Colour the pixels following the instructions in order.

The way data (here of images) is represented affects the amount of storage needed. Raster graphics involves treating an image as a grid. You then store a number to represent the colour at every point (or pixel) in the grid. Run-length encoding cuts how many numbers you need to store by counting the runs of numbers.

Here are some Run length Encoding Pixel Puzzle Picture sheets and solutions that you can download. The version without a colour key is easier to follow so suitable for younger students.

The numbers on each row of a Logical Thinking Compressed Pixel Puzzle tell you the number of cells in each group of black cells in the row. So if the numbers next to a row are 2,4,5 it means that row has a block of 2 black cells, a block of 4 black cells and a block of 5, in that order. Each block is separated by one or more white cells. White cells could also come before or after the blocks. Columns are encoded in the same way.

To solve the compressed pixel puzzles you have to use logical thinking, alternating between different rows and columns, applying the new information you deduce about one to the other. 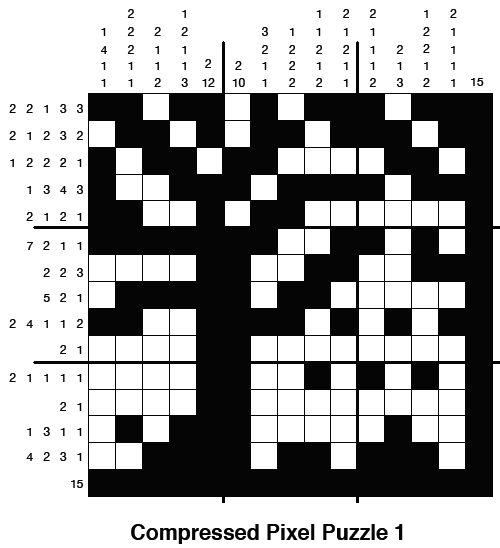 Here are some computer science linked Pixel puzzle sheets and solutions that you can download (more to come):

These colour by number puzzles explore the patterns in odd and even numbers. Find out more on our Odd-even Pixel Puzzle page.

These colour by number puzzles explore how patterns can lead to new algorithms while learning your times tables. Find out more on our Multiplication Table Pixel Puzzle page including a link to an online mosaic designing site.