Here is the next in our series of tips about learning to learn (to program).

A concept map is just a simple kind of diagram. It has:

You start by making a list of all the concepts (the nouns) that are relevant. For example, having encountered a print statement you might (based on your initial limited understanding) include in your list:

and draw them as circles. Then you work out how they are related with those links giving you the arrows. So you might draw a concept map of a print statement as: 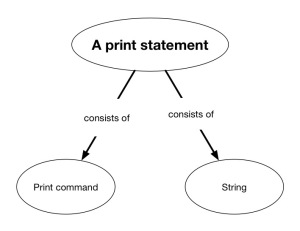 This focusses on the structure – the bits that make up a print statement – rather than what it does. There are lots of ways to draw a concept map around any given concept or area – its not about right and wrong so much as getting down your current personal understanding. However, in programming you will get most benefit if the concept map focusses on what a programming construct does when it is executed.

Including what the print statement does may lead your next version of the concept map to be a little more sophisticated, so something like:

As you understand more then future versions will be more sophisticated still – for example you might in a later version include how the print statement actually takes a string expression not just a string and it is evaluated first to give a string value.

Reading (or listening to) the explanations of experts is important when creating concept maps as that is how you pick up the terminology of an expert – and so the concepts that matter like “statements” and “expressions”. To become an expert you need to talk the language of experts, not just have the skill of an expert. Concept maps can help bring together the terminology and your developing mental models.

The benefit of drawing concept maps is it helps reinforce your understanding of the relationships of concepts to each other and to the concepts you have come across previously….and that is the core of what understanding is about.

More on Learning to Learn (to program)

This site uses Akismet to reduce spam. Learn how your comment data is processed.