Covid19 – at home with the kids update! 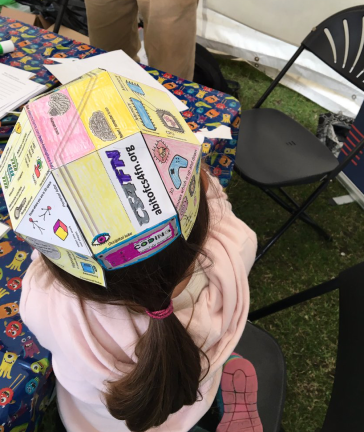 Print this on two A4 sheets (PDF or .pptx) colour in, then cut and stick together to form a wearable cyborg half-human / half-computer hat. Mildy diverting fun for youngsters stuck at home :) Test for size before gluing or taping the flaps down. More printing options for A4 and A3 printers in the original post below. Do make sure you press down hard on the flap to the left of the little binary heart at the top right, with the On/Off switch on it – to switch the hat ON… and give your hat a made-up serial number (see flap at bottom with Institute of Coding on it).

Then cheer us all up by tweeting a photo of your finished hat to @cs4fn (or email cs4fn@eecs.qmul.ac.uk and let us know if we have your permission to share the photo). And wash your hands! :)

A colleague’s young son was rather taken with Ellen McHenry’s Brain Hemisphere Hat, a colour-in cut-out paper hat that maps the lobes of the human brain and some of their functions onto the head of the child wearing the hat. Ellen’s is constructed out of two A4-sized pieces and has darts inset into the pattern to allow it to be shaped into a two-sided 3D paper hat. It’s brilliant.

For QMUL’s Festival of Communities 2019 we decided we’d like a version for CS4FN with half of the hat representing the human side and half representing a robotic / computer ‘brain’. Ours is based on a Half Rhombicuboctahedron design and we’ve called it the Brain Hatagon (it is a hat with many sides). We wanted something that is primarily fun: easy to colour in, tape together and wear. We hope it will help familiarise younger kids with some of the words and concepts relating to computing… while highlighting some of the links* between human brain processing and computer processing.

On these pages you can download and print copies of the ‘hatagon’ and classroom resources.

If you want to VIEW any of the hatagons online before downloading, right click and copy the link then amend the bit at the end saying “dl=1” to “dl=0”. Note that this document was prepared on a Mac computer and contents may shift in transit if opened on a PC…

Please let us know if you get into any difficulties with your hatagons and we’d love to see photos of the finished product (can we share the photos publicly?) – cs4fn@eecs.qmul.ac.uk

Classroom resources
Some links between brains and computers, but see note of caution below*.
Eric Chudler’s Neuroscience for kids – brain vs computer and A computer in your head?

*A note of caution about drawing parallels between brains and computers
There are some superficial similarities and parallels between the ways brains and computers function but it’s important not to take metaphors or analogies too far. Throughout history humans have tended to liken the brain to the dominant technology of the day and we ‘digital age’ humans are no different. Aeon magazine published an article bemoaning the persistence of the notion that brains are often likened to computers – “Your brain does not process information and it is not a computer” – though note that the comments are highly critical of the author’s stance.

This activity was created with the support of Queen Mary University of London’s Centre for Public Engagement and the Institute of Coding.